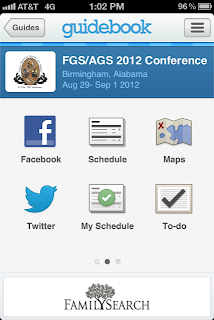 August 20, 2012 – Austin, TX. The Federation of Genealogical Societies (FGS) announces the debut of its free mobile application for the upcoming FGS 2012 Conference, Indians, Squatters, Settlers and Soldiers in the "Old Southwest" – to be held in Birmingham, Alabama 29 August to 1 September, 2012.

Based on the Guidebook app platform, the FGS 2012 Conference app provides smart phone and mobile device users with an easy way track all the exciting events and happenings at one of the largest genealogy events of the year.