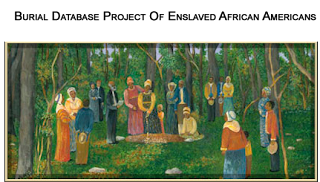 “This website is our liaison to members of the public who share our desire to bring dignity to the enslaved by identifying and documenting their burial grounds,” said Sandra Arnold, a Fordham employee and student, and the founding director of the project.

“We hope to receive support from descendants, property owners, churches and local community organizations to properly memorialize these forgotten people. Most enslaved African Americans are buried in unmarked or abandoned graves and are increasingly in danger of desecration and forever being lost,” she said.

A senior secretary at Fordham University by day and adult undergraduate student at night, Arnold got the idea for the database when she stumbled upon her own ancestor's burial site some years ago.

Arnold visited the site for the first time in 2003, paying homage to the graves of her great-grandfather, B. Harmon, a former slave, and his wife, Ethel. Arnold credits her 99-year-old great-aunt, E. Frye (Harmon’s daughter), for igniting her curiosity to find and visit the site.

“She talked about the cemetery all the time like it was a precious jewel. I just wanted to see it, and then I wanted to see where he was buried. So I went out there, and it was just breathtaking,” she said. “It’s an island in a cotton field, at the end of a field road.”

“The potential of this project is immeasurable,” Arnold said. “Not only can it properly memorialize the enslaved, it can also facilitate a mutual and respectful dialogue about a subject that is still very sensitive to many.”

“The launch of the Burial Database Project of Enslaved African Americans is significant at this historical moment not only because it is the year of the sesquicentennial of the Emancipation Proclamation, it is also a moment of some urgency as the locations of these spaces may soon disappear in the oral histories of descendants and local communities. The launch is a call to the public to assist the Project in uncovering and documenting these important historic monuments.”
- Irma Watkins-Owens, Director and Fordham professor of African and African American Studies

"The pervasive cemeteries of the enslaved are the indelible, though often buried, mark of humanity on a historic landscape of willful dehumanization. These represent the contestation of humanity from which the distinctive wealth and culture of the Americas are significantly derived. The Burial Database of Enslaved African Americans takes sides in that ongoing history."
-Michael L. Blakey, National Endowment for the Humanities, Professor of Anthropology, Director of the Institute for Historical Biology, College of William and Mary.

"I have been studying historic, African-American cemeteries for over a decade. Our understanding of 19th-century communities, religious beliefs, and family structure is not complete without a thorough study of these historic sites. The Burial Database Project represents a significant step forward in our efforts to locate and document these sacred sites so that they will be preserved for current and future generations to visit and study. Given the generations of enslaved families, I think most people will be surprised at how many historic slave cemeteries exist.”
-Lynn Rainville, Founding Director, Tusculum Institute, Research professor in the Humanities, Sweet Briar College

"The Burial Database Project is of huge significance for both the memorialization and the study of the enslaved populations of the Americas. Drawing on the most recently developed techniques of the digital humanities, including crowd-sourcing, it will result in the establishment and maintenance of a National Burial Ground Registry of Enslaved African-Americans that will become a major source for re-creating and understanding the lived experience of slavery in our country’s past."
-David Eltis, Robert W. Woodruff Professor of History; Co-Editor, Transatlantic Slave Trade Database; Emory University

“Too often Americans have chosen to forget our shared history of slavery, finding it too painful to dwell on or too distant from our lived experiences. Nowhere is this more evident in the neglect given to the burial grounds of enslaved African Americans. In identifying these sites, the Burial Database Project will not only provide important information to historians but will honor the memory of those who labored in bondage.” – Thomas Thurston, Education Director, Gilder Lehrman Center for the Study of Slavery, Resistance, and Abolition, Yale University

As you’ll see in this USA Today story from 2012, this database is sorely is needed. Similarly, this CNN story from February 2011, refers to the “invisible dead.” And this November 2011 story from NewsOne.com shows how these burial sites are sometimes simply stumbled upon.

Founded in 1841, Fordham is the Jesuit University of New York, offering exceptional education distinguished by the Jesuit tradition to more than 15,100 students in its four undergraduate colleges and its six graduate and professional schools. It has residential campuses in the Bronx and Manhattan, a campus in West Harrison, N.Y., the Louis Calder Center Biological Field Station in Armonk, N.Y., and the London Centre at Heythrop College, University of London, in the United Kingdom.
Posted by Thomas MacEntee on February 28, 2013
Email ThisBlogThis!Share to TwitterShare to FacebookShare to Pinterest
Labels: African-American genealogy, cemeteries, death records, Fordham University
Newer Post Older Post Home