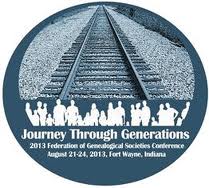 April 8, 2013 – Genealogy bloggers, societies, writers and editors are invited to participate in the Federation of Genealogical Societies 2013 Conference by becoming FGS 2013 Ambassadors. Ambassadors help to spread information about the FGS 2013 Conference in Fort Wayne, Indiana, August 21-24, through social media to their friends, colleagues, and everyone interested in genealogy.