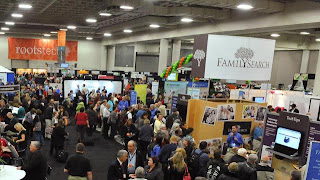 FGS and RootsTech Events To Be Held In Tandem
February 12-14, 2015 in Salt Lake City

22 August 2013 – Austin, TX. The Federation of Genealogical Societies (FGS) announced today that its 2015 National Conference will be held February 12-14, 2015, in Salt Lake City, Utah in conjunction with RootsTech, hosted by FamilySearch. RootsTech is held each February in Salt Lake City and helps thousands of attendees from around the world discover and share family connections, stories, and history.

With the Salt Palace Convention Center as the common venue, both FamilySearch and FGS are committed to producing a one-of-a-kind genealogy event addressing the educational needs of the family history, technology and genealogical society communities. As the logistics of this sizeable event are still being worked out, both FGS and FamilySearch will work together to share resources and provide cost benefits for all parties, including attendees and exhibitors. Attendees can expect to see familiar elements of previous FGS and RootsTech events including keynote presentations, a Society Showcase and Expo Hall.

Registration for both events will begin in August 2014, six months prior to the February 2015 dates. FGS will also hold a smaller national event for its members in late 2015, with details to be announced at a later date.

FGS President D. Joshua Taylor states, “FamilySearch has been a valued partner and sponsor for FGS during its past conferences. It only makes sense for both organizations to work together and produce what will be the most talked about genealogy events of 2015.” Taylor added that such an event brings the best of RootsTech and FGS conferences together under one roof and will offer genealogists and family historians a wide array of activities and educational opportunities.