ISGS Announces Soldiers of the American Revolution in Illinois 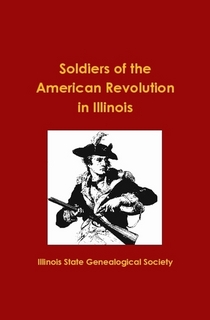 August 12, 2013 – Springfield, IL. The Illinois State Genealogical Society (ISGS) announces the publication of an expanded and revised version of Soldiers of the American Revolution in Illinois.

In its first venture in the world of self-publishing and “print on demand,” ISGS has published Soldiers of the American Revolution in Illinois in hardcover or e-book version through its store at Lulu.com. Visit http://bit.ly/ilamrevsoldiers to order!

The alphabetical listing of “The Soldiers of the American Revolution Buried in Illinois” published in 1976 by Illinois State Genealogical Society has been expanded to include new entries, children of the entry, (other family members), history found in and referencing to pension records relating people, places and events, location of graves and references to searching for the Revolutionary War Soldier connected to Illinois. The expanded version includes the very early Soldiers in Illinois before the establishment of the Northwest Territory (1787) and Illinois (1818), many of French extraction.

According to Howard Manthei, ISGS Publications Chairperson, “Thanks to two years of tireless research by ISGS board member Jayne Cates, the new release of this book contains a wealth of detail about Revolutionary War soldiers that were connected to Illinois and has three helpful indexes: soldier, burial, and spouse. The e-book format, with the ability to search the contents on a computer or e-reader, adds a new dimension to our publications.”

Those interested in review copies of Soldiers of the American Revolution in Illinois should contact Howard Manthei, ISGS Publications Chair at isgspublications@ilgensoc.org.

The Illinois State Genealogical Society (ISGS) was formed in 1968 through the cooperative effort and forward thinking of Illinois genealogical society representatives, who envisioned a statewide genealogical organization. ISGS is a not-for-profit, nonsectarian, educational organization. ISGS was established for the following purposes:
Follow us on Facebook (http://www.facebook.com/ILgensoc), Twitter (http://www.twitter.com/ILgensoc) and on our blog at http://ilgensoc.blogspot.com.
Posted by Thomas MacEntee on August 12, 2013
Email ThisBlogThis!Share to TwitterShare to FacebookShare to Pinterest
Labels: Illinois State Genealogical Society, ISGS, publication
Newer Post Older Post Home