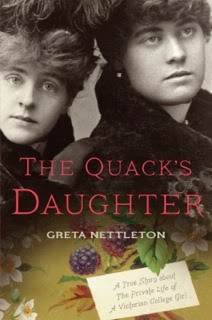 “It’s really a work of art…written exactly as Prof. Lucy Salmon would have recommended, and will be of great interest to generations of Vassar students and alumnae.”
Prof. Emer. Elizabeth Daniels, Vassar College Historian

“I loved reading this family saga…Treat yourself to this great book on your summer vacation, and you’ll be in such a good mood at the airport, you’ll hug the TSA guy.”
Bobbi King, Eastman’s Online Genealogy Newsletter


NEW YORK, NY – Author Greta Nettleton has been invited by the New York Vassar Club and the New York Genealogical and Biographical Society to speak about her book, The Quack’s Daughter: A True Story about the Private Life of a Victorian College Girl. Nettleton, a resident of Palisades, NY, will be speaking and signing first edition copies of her book on November 14th at 6:00 p.m. at the NYG&B headquarters at 36 West 44th Street. Nettleton extols, “I am excited to be speaking to an audience that treasures New York City history as much as I do. This is a time-traveler’s trip back to the Gilded Age, based on years of research and lavishly illustrated with hundreds of images.”

In The Quack’s Daughter, Nettleton tells for the first time the story of her great-grandmother Cora Keck (1865-1921), a precocious musician sent to Vassar College in 1884, and of Cora’s mother, the notorious “quack,” who was a wealthy self-made physician and the proprietor of Mrs. Dr. Keck’s Palatial Infirmary for All Chronic Diseases in Davenport, Iowa. While struggling to overcome her inglorious social background, Cora earned top billing as a brilliant concert pianist in Vassar’s professional-level music conservatory program. Her classmate Kitty, the daughter of a Tweed Ring teamster, lived in a mansion at 134th Street and Broadway where Cora spent her vacations exploring New York’s best-loved landmarks and partying until 4 a.m. with “sporting men” and social strivers well-known to everyone in the audience. Another classmate made national headlines by marrying one of the convicted Haymarket bombers in Chicago in 1889.

“As I set out on a purely personal journey to discover my great-grandmother’s coming of age story, I realized that her quest touches many themes that are crucial to the wide study of 19th century women’s history in America,” writes Nettleton, “The fundamental similarities between Cora’s life and our own times were so striking that I have begun to see the 1880s as a departure point for understanding modern America. We need to own these stories in order to understand ourselves.”

Greta Nettleton has edited and written for a variety of clients ranging from software startups on New York’s Seventh Avenue to the World Bank. This is her first book. She holds a B.A. in History from Duke University and an M.A. from the University of Texas at Austin, and is currently at work on a biography of Cora’s mother, Mrs. Dr. Rebecca J. Keck, about 19th century women physicians and the tumultuous early years of America’s medical profession.

On Facebook, friend Cora Keck for a sneak peek into her “current” activities. New images are being posted from Cora’s scrapbooks and diaries in the order that she collected and wrote them.
Posted by Thomas MacEntee on October 30, 2013
Email ThisBlogThis!Share to TwitterShare to FacebookShare to Pinterest
Labels: books
Newer Post Older Post Home