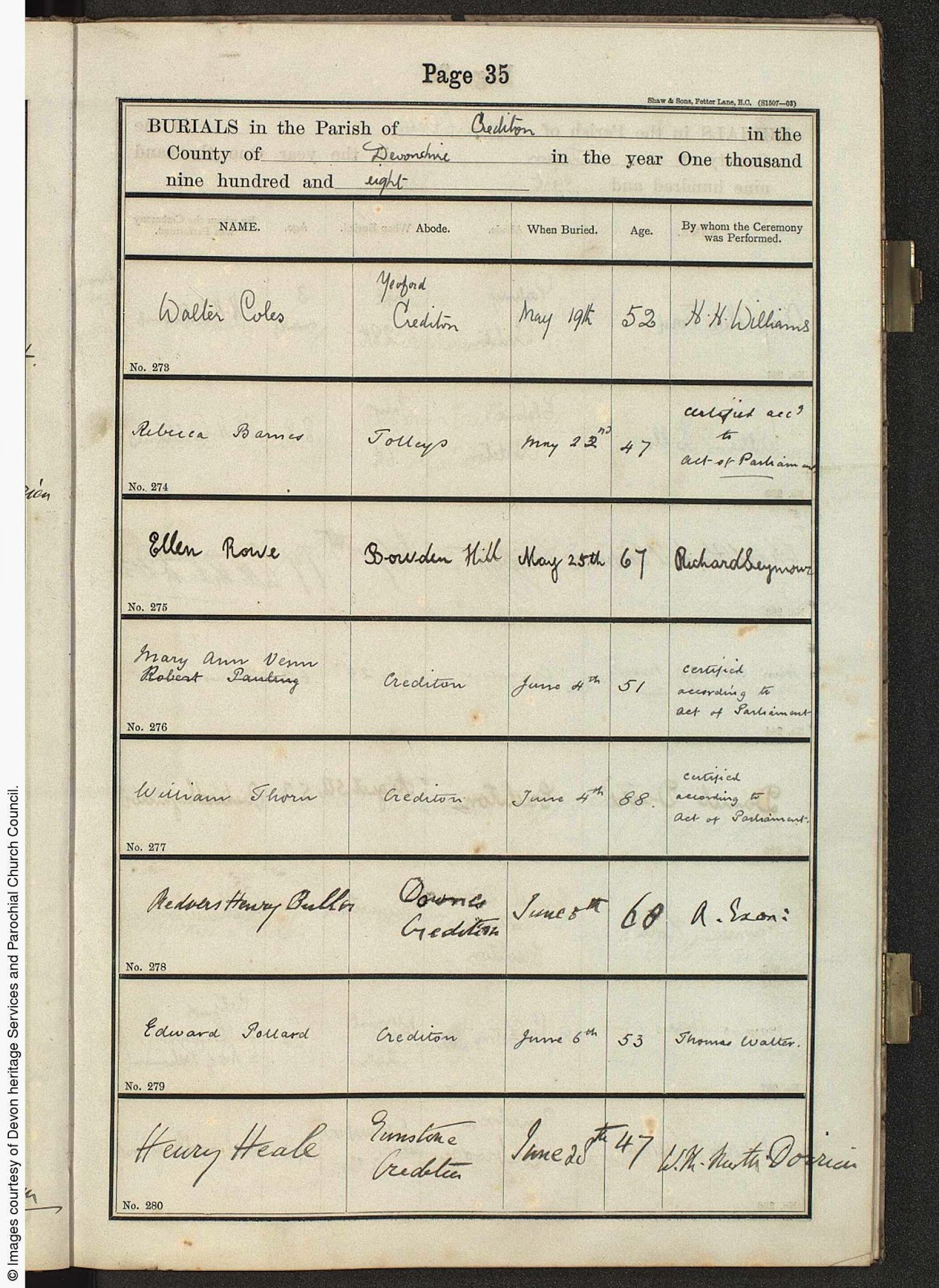 Leading UK family history website findmypast.co.uk has today, 30 May 2014, published online for the first time parish records in partnership with Devon Heritage Services, as the latest instalment of their 100in100 promise to launch 100 record sets in 100 days.

Spanning 1538 to 1915, the Devon Collection is a rich source comprising over 4 million fully searchable transcripts and scanned colour images of the handwritten parish registers held by the record offices in Barnstaple and Exeter. With Plymouth and West Devon Record Office’s records already available on findmypast, these new additions mean that findmypast’s Devon Collection is the best possible place to find Devonshire ancestors. 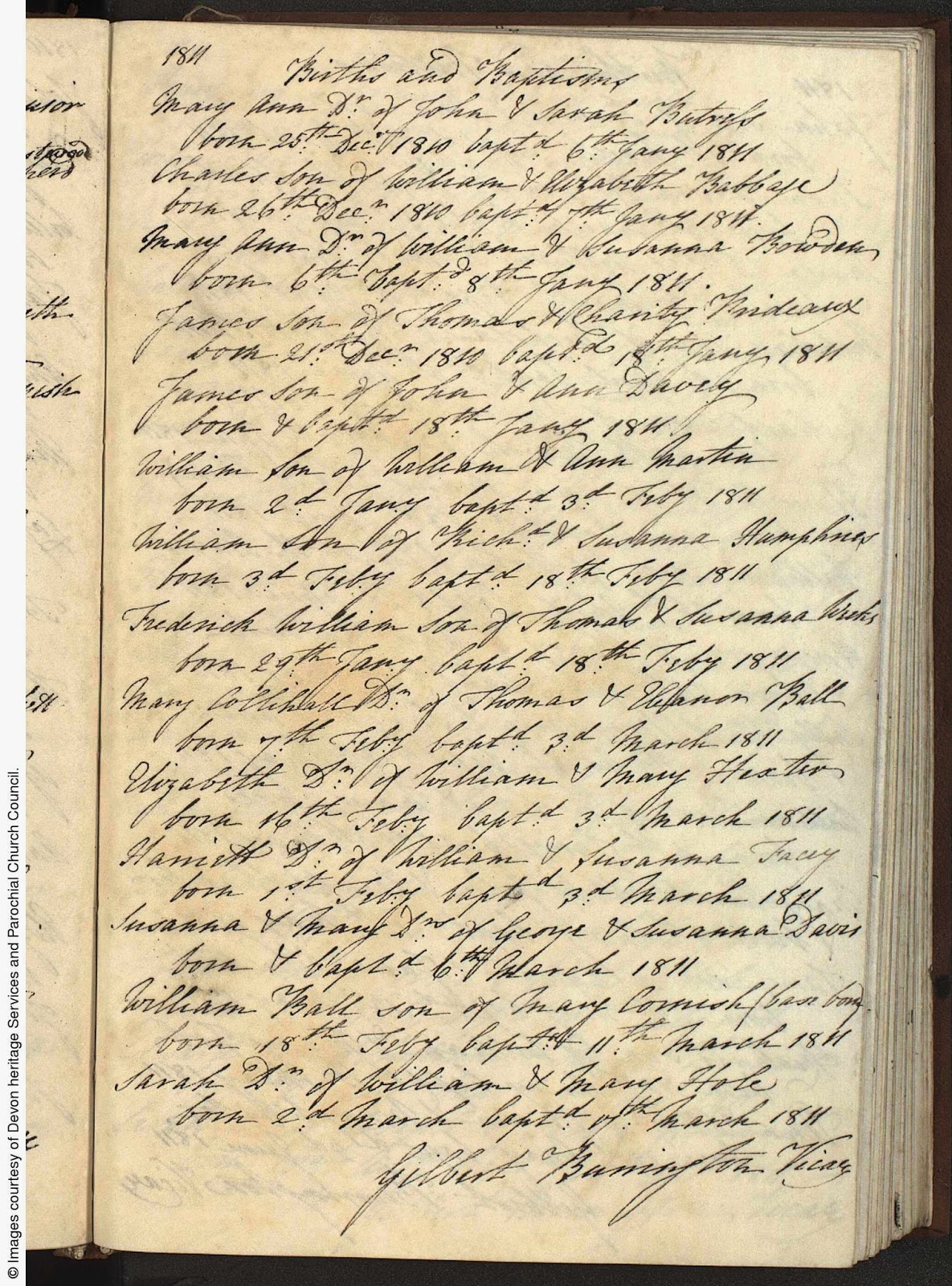 The baptism, marriage and burial records of many notable Devonians are stored within the collection. The baptism of literary icon Samuel Taylor Coleridge, author of ‘Rhyme of the Ancient Mariner’ and founder of the Romantic Movement, can be viewed in records from the parish of Ottery St Mary. Bad boy satirist John Gay, member of the Scriblerus club and author of ‘The Beggars Opera’, was born in Barnstaple in 1685 and records of his baptism in 1686 can be found from the Parish of Black Torrington. Crime writer Agatha Christie’s baptism record appears in the parish register of Tormohun in 1890 under her maiden name Agatha Mary Clarissa Miller. Legendary explorer Sir Richard Francis Burton, who was famous for completing the Hajj to Mecca disguised as a pilgrim, translating the Karma Sutra into English and becoming the first European to visit the great lakes of Africa amongst other exploits, was born in Torquay in 1821 and is recorded in the collection.

The records also include the polymath Charles Babbage, who is widely considered to be the father of the computer. Records of his 1814 marriage were kept by the parish of East Teignmouth. Sir John Churchill, the 1st Duke of Marlborough and ancestor of Winston Churchill was born in the parish of Musbury at the height of the Civil War. He was a legendary soldier who revolutionised the British army in the late 17th century and was, for a time, one of the richest men in England. Details of his baptism can also be viewed in the archives. VC winner and hero of the Zulu wars, Sir Redvers Henry Buller, is yet another famous military man from the county. Sir Redvers was widely celebrated before his disastrous leadership during the Second Boer War saw him sacked by the Minister for War, St. John Brodrick. He was born in Crediton in 1839 and died there in 1908, with both events being recorded by the parish.

Devon is one of the largest counties and therefore highly significant for family historians. As Maureen Selley, Chairman of Devon Family History Society www.devonfhs.org.uk, whose records are also available on findmypast, put it; “We all have Devonshire ancestors, it’s just that some of us haven’t found them yet.” Findmypast’s existing Devon records are already the most popular parish record set on the website.

The records are also of international significance as many historic Devonians emigrated to Canada, the US and Australia to work in the booming mining, fishing and agricultural industries. Devon’s position on the west coast meant that it was often used as a jumping off point for those headed to the United Sates. The Mayflower, the ship that carried the first pilgrims across the Atlantic, departed from Plymouth and the Devon Collection houses records that predate this famous voyage. These new records will help people from all over the world to trace their ancestral roots back to the county.

The Devon Collection adds to findmypast’s already extensive cache of parish records, the largest available online. These records allow family historians to go as far back as the 1500s, and with more parish records still to come as part of the 100in100 promise, family historians can now explore their more distant roots more easily than ever before.

You can view these exciting new records here: http://100in100.findmypast.co.uk/.

Debra Chatfield, a family historian at findmypast.co.uk, said: “The Devon Collection is one of the largest regional parish record collections available anywhere online and contains some truly wonderful gems. This is the first time that parish records for the whole county have been available to search in one place, enabling people all around the world to discover fascinating details of Devonshire ancestors they didn’t know they had in this historical goldmine.”

Tim Wormleighton, of Devon Heritage Services said: “ We are delighted that, after a lengthy process of preparation involving a lot of hard work by a large team, people will now be able to access high quality images of the majority of Devon’s parish register entries online for the first time ever through findmypast”.