July 22, 2014 – Chicago, Illinois. Jennifer Holik announces the release of two of her latest books. The Tiger’s Widow the second book in the Stories of the Lost series. And, Stories from the Battlefield: A Beginning Guide to World War II Research. 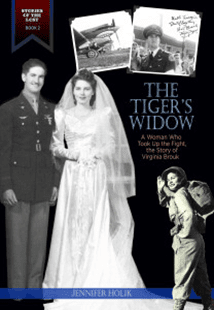 Love knows no boundaries of time and space or life and death. It exists forever in our hearts as we remember and honor those who have gone before us. Through those memories we pass life lessons on to the next generation. We teach others there is light after darkness, hope after despair, and love is the glue that puts shattered hearts back together. This is a story of five hearts separated by time and space; hearts which would meet in the perfect moment. It is a story about never ending love that lived on even after death.

Join me on a journey that spans 72 years and several continents. This is the story of the life of Virginia Scharer Brouk, the wife of Flying Tiger, Robert Brouk. Virginia picked up the pieces of her life and joined the Women’s Army Auxiliary Corps, later known as the Women’s Army Corps (WAC,) to take up the fight after Robert was killed in a plane crash. Virginia’s story is of life, loss, war, and the connection of hearts filled with love.

Stories from the Battlefield: A Beginning Guide to World War II Research 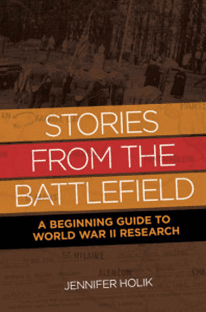 All the records burned! We hear this over and over when we think about World War II research. Yet there are many records and resources available to get you started. In this short guide, you will learn the basics of World War II military research and what to look for in your home sources. Then we will explore components of personnel files, death records, and other associated records in this short book.

This guide is meant to be a starting point for World War II research, not an exhaustive examination of all the military branches and records available. In 2015 I will release the first in a series of in-depth books on World War II records, the first being Stories from the Battlefield Volume I: Navigating World War II Home Front, Civilian, Army, and Air Corps Records. Please visit my website for more details on the release dates.

The Tiger’s Widow and Stories from the Battlefield are available through the author’s website: http://jenniferholik.com where you can also find the World War II Toolbox!

As a researcher and writer she can help you research and piece together the stories of your ancestors, particularly if they served during World War II. Jennifer is also on staff at the World War II History Network where she assists with the genealogy group.
Posted by Thomas MacEntee on July 22, 2014
Email ThisBlogThis!Share to TwitterShare to FacebookShare to Pinterest
Labels: Jennifer Holik, publication, WWII
Newer Post Older Post Home