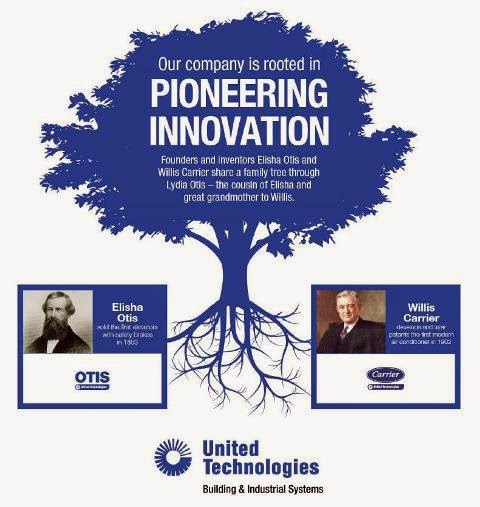 “The blood relationship that our New England Historic Genealogical Society (NEHGS) researchers discovered between Elisha Otis and Willis Carrier demonstrates the impact that genealogical study has upon history,” said D. Brenton Simons, President and CEO, NEHGS. “By connecting two innovative individuals on a family tree – our understanding of ‘family’ is once again advanced. While it has been observed for centuries that cousins work closely together for the benefit of their clan, in this instance two cousins worked diligently for the benefit of society with innovations that dramatically changed our way of living.”

Elisha Otis was born in Halifax, Vermont in 1811 and later moved to Yonkers, New York. Two years after inventing the “safety elevator,” Otis famously promoted it at the 1854 World’s Fair in New York City. With the help of circus legend P.T. Barnum, Otis stood atop an elevator platform as the rope was cut to demonstrate the springs that snapped into place and kept the elevator from falling. Today, Otis Elevator Company is the world’s largest manufacturer and maintainer of people-moving products, including elevators, escalators and moving walkways.

Willis Carrier was born in Angola, New York, near Buffalo in 1876. Less than a decade after inventing modern air conditioning in 1902 to solve a production problem at a Brooklyn print shop, he solidified his role in history as the “father of air conditioning” with the Rationale Psychometric Formulae. It is the most famous and enduring document ever prepared on the topic and Carrier’s equations still form the basis of air conditioning design calculations. Today, 112 years later, Carrier is the world’s leader in high-technology heating, air-conditioning and refrigeration solutions.

“The creative thought running through the Otis and Carrier families enabled buildings to rise higher and become more comfortable, increasing productivity, making urban life possible and creating the skylines of today,” said Geraud Darnis, president, UTC Building & Industrial Systems. “People often joke that ‘it must be in the water,’ but in this case, that inventive spirit was in their blood.”

“I think both Elisha and Willis would be pleased to see their pioneering spirit alive and well today,” said John Mandyck, chief sustainability officer, UTC Building & Industrial Systems. “Their legacies of innovation have inspired our engineers to create advancements in energy efficiency to support the world’s move to greener buildings. It’s not surprising that they were family long before their brands became part of the same company.”

A video about the discovery is available on UTC Building & Industrial Systems’ YouTube channel. To learn more about Carrier and Otis, visit Carrier.com, Otis.com or follow both on Twitter: @CarrierGreen and @OtisElevatorCo.

The founding genealogical society in America, New England Historic Genealogical Society was established in 1845. Today it has a national collecting scope and serves 65,000 constituents through our award-winning web site www.AmericanAncestors.org.


Since 1845, NEHGS has been the country's leading research center for genealogists and family historians of every skill level. Today we provide more than 25,000 members worldwide with access to some of the most important and valuable research tools anywhere. Our resources, expertise, and service are unmatched in the field and our leading staff of on-site and online genealogists includes experts in early American, Irish, English, Scottish, Jewish, African American, Native American, and Canadian research. Expert assistance is available to members and nonmembers in a variety of ways. The NEHGS library and archive, located at 99-101 Newbury Street in downtown Boston, is home to more than 28 million items, including artifacts, documents, records, journals, letters, books, manuscripts, and other items dating back hundreds of years.
Posted by Thomas MacEntee on July 23, 2014
Email ThisBlogThis!Share to TwitterShare to FacebookShare to Pinterest
Labels: NEHGS, New England Historic Genealogical Society
Newer Post Older Post Home