International Tracing Service Chief to Speak in SLC on Wednesday free, open to the public 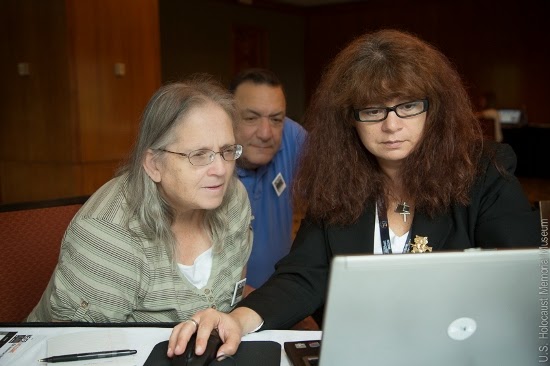 Diane Afoumado, PhD., Chief, International Tracing Service (ITS) Research Branch, United States Holocaust Memorial Museum will be speaking on the records and the services offered by the ITS on Wednesday, August 13, 2014 at 7:00 pm at the Plaza Hotel in downtown Salt Lake City. Held in conjunction with the Eastern European Family History Conference sponsored by the Foundation for East European Family History Studies (FEEFHS), the presentation is open to the public and free to attend.

While the United States Holocaust Memorial Museum (USHMM) in Washington, DC, is the United States’ repository for the International Tracing Service (ITS) collection, the records will be of interest to anyone with ancestors who may have been persecuted or displaced during WWII. Afoumado reports that the ITS collection “contains diverse information about the persecution and murder of (both) Jews and non-Jews—Poles, Ukrainians, Lithuanians, Latvians, Estonians, Soviet prisoners of war, Roma and Sinti, homosexuals, Jehovah’s Witnesses, and persons with disabilities—under Nazi rule.”
Documents such as camp arrival lists, grave locations, transport lists, prisoner cards, forced labor lists, death lists, displaced person applications for assistance, deportation lists, emigration applications or questionnaires, registration and work cards, sometimes with photographs, are contained in the collection. Research services to access those records are provided by ITS to the public at no charge. Afoumado says the collection contains “several millions of documents,” saved by the Holocaust Survivors and Victims’ Resource Center to ensure “that the individual experiences of survivors and victims of the Holocaust and Nazi-era persecution are collected, preserved and disseminated for future generations.

Ms. Afoumado will be available on Thursday following the presentation to begin the research process with those interested, according to Peg Ivanyo, FEEFHS conference chair. “The ITS Research Branch has dedicated both funding and personnel to bring this wonderful service to our conference, and we wish to share it broadly with the community to the extent possible,” Ivanyo says. Anyone may attend the Wednesday evening presentation and subsequently set up an appointment to meet with Ms. Afoumado or complete the paperwork for her to begin the process of searching the records database at a later time.