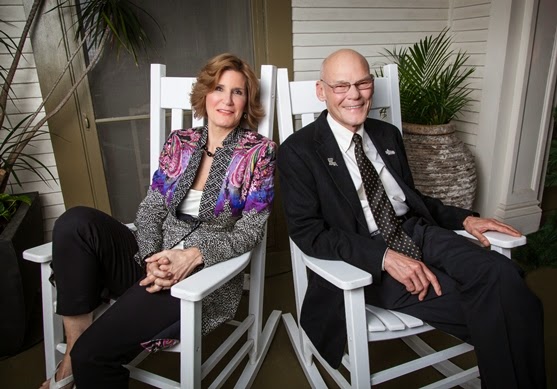 March 25, 2015—Boston, Massachusetts—“Continuing the tradition of celebrating some of the most respected living Americans in history, public service, the arts, and culture, on April 24, the New England Historic Genealogical Society (NEHGS) will honor Mary Matalin and James Carville with the Society’s Lifetime Achievement Award,” NEHGS President and CEO D. Brenton Simons announced today.

As keynote speakers at the annual NEHGS Family History Benefit Dinner—one of Boston’s premier social and charitable events of the year—Matalin and Carville will be honored with NEHGS’s highest award, which celebrates a commitment to the advancement and preservation of family history in America. Well-known individually and as one of the nation’s most intriguing and powerful married couples for their service on the American political scene, and for frequent public appearances as media hosts and commentators, Matalin and Carville are one of the nation’s most politically opposed, ideologically mismatched, and intensely opinionated couples. They dated in 1992 while Matalin led the campaign for the re-election of President George H. W. Bush and as Carville advised presidential candidate Bill Clinton.

Together, they are authors of Love & War: Twenty Years, Three Presidents, Two Daughters and One Louisiana Home. The 2014 bestselling memoir looks at how they—and America—have changed in the last two decades and gives the nation insights to an unusual collaboration proving that after 20 years of marriage two very spirited and independent individuals can manage to agree on a few things. Book reviews described the authors as “In love with family, with their home city of New Orleans, with the nation and with each other.” In a celebration of making differences yield to success, interweaving love and family into a fabric of unity and service, the couple will speak on “Our American Heritage” at the NEHGS Benefit Dinner.

In making the announcement, President and CEO Simons recalled the tradition of NEHGS to pay public tribute to important figures who represent some of the best contributions to our understanding of family in the nation’s past, present, and future. “One hundred and seventy years after our founding, NEHGS continues its commitment to document a significant part of our nation’s history through the celebration of remarkable individuals who have made an indelible contribution to our understanding of family in America,” commented Simons. “Mary Matalin and James Carville embody that example. Through the often entertaining dynamic that their very public relationship has brought to the nation’s eye—in the White House, as well as in their own hometown—they have won the hearts of people everywhere who love to be reminded that family unity is possible among even the most unlikely personalities.”

The April event will benefit the NEHGS capital campaign, Connecting Families. Advancing History. A comprehensive campaign with a goal of $55 million, the campaign has raised more than $53 million to date. Event Chairs of the Family History Benefit Dinner are NEHGS Trustees Judith Waite Freeman and Susan P. Sloan. The Dinner’s Corporate Benefactors include Wells Fargo & Company, Eaton Vance Investment Counsel, and Piña Napa Valley. Benefactors and patrons of the event are invited to a private champagne reception with guests of honor Matalin and Carville preceding the dinner. For more information, or to register, visit AmericanAncestors.org/dinner.

The founding genealogical society in America, New England Historic Genealogical Society (NEHGS) was established in 1845. Today it has a national collecting scope and serves more than 75,000 constituents through an award-winning website, AmericanAncestors.org.