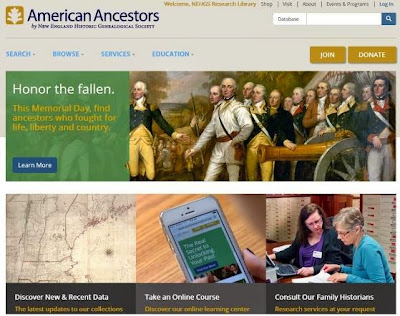 Family Historians May “Honor the Fallen” by Searching FREE on AmericanAncestors.org for Patriots on the Family Tree Who Served in Colonial Times

May 20, 2015—Boston, Massachusetts—In the spirit of Memorial Day and to make ancestral research even more productive this holiday weekend, AmericanAncestors.org and New England Historic Genealogical Society (NEHGS) have made several online military databases accessible FREE to all who wish to search for patriots in early American colonial wars.

Colonial Soldiers and Officers in New England, 1620-1775 is accessible FREE this week through next Wednesday, May 27. Prior to the American Revolution, many men served in the militia and fought against Native Americans, the French, and other opponents. Many of these battles were extensions of European wars. This database contains more than 35,000 records of service for individuals in Massachusetts and other New England states who served from the seventeenth century to the Battle of Lexington and Concord. These records, originally published by the New England Historic Genealogical Society with support from the Society of Colonial Wars in the Commonwealth of Massachusetts, were compiled from many different sources to create as comprehensive a list as possible.

Massachusetts Revolutionary War Pensioners’ Receipts 1799-1807 and Massachusetts Revolutionary War Pensioners’ Receipts 1829-1837 are also accessible through Wednesday, May 27. Many of the soldiers who served during the Revolutionary War were given pensions from the federal government for their service. These manuscript collections at NEHGS contain a number of original receipts with the soldiers’ signatures, acknowledging the receipt of their pension funds. These two searchable databases contain images of these receipts, including the original signatures or marks of the pensioners.

Registration at AmericanAncestors.org is required as a FREE Guest Member to gain access to these valuable resources. Guest User accounts allow web visitors to use a limited suite of AmericanAncestors.org databases and access web content such as making purchases from the online store. Unlimited access to all 450+ million records and other benefits is through membership at NEHGS.

Family historians may start their search for their ancestors who bravely served in our country’s colonial times at this site: AmericanAncestors.org/memorialday.
Posted by Thomas MacEntee on May 21, 2015
Email ThisBlogThis!Share to TwitterShare to FacebookShare to Pinterest
Labels: American Ancestors, NEHGS, New England Historic Genealogical Society
Newer Post Older Post Home