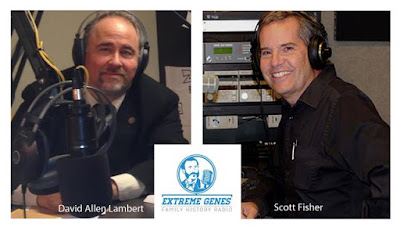 Extreme Genes Radio founder, producer, and host Scott Fisher announced that NEHGS Chief Genealogist David Allen Lambert will join Extreme Genes as a regular on the weekly program, co-hosting a segment simultaneously from Boston, Massachusetts—headquarters of NEHGS, the founding genealogical society in America. Lambert, a frequent guest on the program since it began in early 2014, is a frequent speaker and lecturer on the national genealogical conference circuit.

“We are extremely pleased to announce this new Extreme Genes collaboration and I am delighted to have David Allen Lambert join the team to deliver the best radio listening experience possible for passionate genealogists everywhere,” stated Fisher. “David is a talented genealogist, historian, and commentator—and has the perfect style and fit for the future of our growing broadcasts,” he added.

David Lambert has been on the staff of NEHGS since 1993 and is the organization’s Chief Genealogist. He is an internationally recognized speaker on the topics of genealogy and history. His genealogical expertise includes New England and Atlantic Canadian records of the 17th through 21st century, military records, DNA research, and Native American and African American genealogical research in New England. Lambert has published many articles in the New England Historical and Genealogical Register, the New Hampshire Genealogical Record, Rhode Island Roots, The Mayflower Descendant, and American Ancestors magazine.

Fisher, a Connecticut native, has been in radio since his youth, and he has spent three decades of spare time as a passionate “roots sleuth.” A long-time morning radio show host in major U.S. urban markets, he is the author of New York City Methodist Marriages, 1785-1893 (Picton Press, 1994). He has also been published in the New York Genealogical and Biographical Society Journal (April 2004), and Catholic Ancestor, Journal of the Catholic Family History Society of England (June 1996). His ten books on the families of both his and his wife’s ancestors, written over 25 years, fill the better part of a shelf in the Fisher family room library. Fisher was featured on People.com in April 2015 for finding the next-of-kin of a murder victim whose remains were recently found after 32 years.