NEHGS Salutes the Nation’s Anniversary with FREE Access to the Great Migration Databases on AmericanAncestors.org 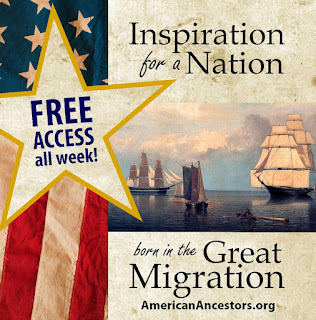 June 29, 2015—Boston, Massachusetts—In a salute to the anniversary of our nation’s independence, New England Historic Genealogical Society (NEHGS) is granting FREE access to all online searchable databases related to the Great Migration. A unique foundation of governance and religion was created by the 20,000 men, women, and children who crossed the Atlantic between 1620 and 1640, seeking opportunity and relief in New England, in the period known as the Great Migration. These are the Mayflower names, the Pilgrims, the Puritans, and the families that delight and provide rich insights for genealogists and family historians. Since 1988 NEHGS has undertaken the Great Migration Study Project, directed by Robert Charles Anderson and scheduled for completion in 2016. The results are open to the public to research FREE during the first week of July 2015 on its data-rich website AmericanAncestors.org.

A total of nine searchable databases comprise the Great Migration project on AmericanAncestors.org, consisting of thousands of records. Some content highlights include:

The first phase of the Great Migration Study Project attempts to identify and describe all those Europeans who settled in New England prior to the end of 1633. The date was chosen because of the steep increase in migration beginning in 1634 and continuing for the rest of that decade (see Robert Charles Anderson, "A Note on the Pace of the Great Migration," The New England Quarterly 59 [1986]:406-07). As a rough estimate, about 15 percent of the immigrants to New England arrived in the fourteen years from 1620 to 1633, with the remaining 85 percent coming over in half as many years, from 1634 to 1640.

This database comprises Volumes 1 through 20 of the Great Migration Newsletter, published between 1990 and 2011. Each 32-page issue contains one or two feature articles, a column with editor's comments, and a review of recent literature on the Great Migration. Each issue also contains a section with detailed coverage of one of the towns settled during the Great Migration, or of a specific critical record, or group of records.

From 1620 to 1633, only a few hundred people stepped on the shores of New England in any given year. But all of a sudden in 1634 the trend surged upward and as many as 2,500 people immigrated in 1634 and again in 1635. In May 1634, the population of Massachusetts doubled in just one month, and when comparing immigration in 1634 and 1635 to immigration in 1633 and earlier, there was a tenfold jump in annual immigration.

These volumes covering surnames beginning with A through Y, complete a series documenting the watershed years of 1634 and 1635. They trace families and individuals immigrating to New England during those two years – a time of rapid migration and settlement.

Each alphabetical entry for a family or individual includes:

• Place of origin, if known

• Date and ship on which they arrived in New England, if known

• Earliest known record of the individual or family

• Return trips to their country of origin, whether temporary or permanent

The full introduction to these seven volumes is available for download as a pdf file. The introduction includes a description of the methodology used to create the sketches as well as thorough descriptions of the sources used.

The database provides an index to the sketches of 219 Great Migration individuals, and the 7,192 name, 2,040 place, and 249 ship name references contained within those sketches. The images of the original book pages are available from the search results pages.

These Great Migration databases from NEHGS will be open with FREE access to the public beginning Wednesday, July 1, through Wednesday, July 8. Registration at AmericanAncestors.org is required as a FREE Guest Member to gain access to these valuable resources. Guest User accounts allow web visitors to use a limited suite of AmericanAncestors.org databases and access web content such as making purchases from the online store. Unlimited access to all 450+ million records and other benefits is through membership at NEHGS.

Family historians may start their search for ancestors who came to the country as part of the Great Migration at this site: AmericanAncestors.org/specials/fourth-of-july.