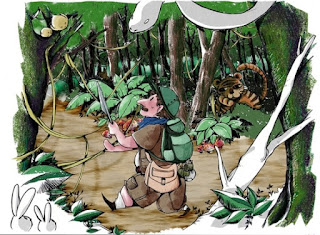 Phoenix, AZ, July 9th, 2015 — Troy Hallewell, author of “The People Who Made Me”, a children’s illustrated poem on the subject of ancestry, is seeking supporters with the goal of raising the capital necessary to cover the expenses of hiring a professional illustrator and publishing the work.

With the advent of what some are calling the ‘E-book Revolution’, sales of children’s books have increased over the last three consecutive years. Compared to other forms of fiction, children’s books are up almost 2% more than their industry peers. In spite of a rosy outlook in children’s books one sub genera where they don’t seem to be picking up as much speed is the ancestry/family history genera. This genera seems to be losing out to more colorful book themes and plots.

“The People Who Made Me” is trying to make family history and personal ancestry… well, personal, to both parents and their children. It’s my goal that with professional and colorful pictures depicting exciting scenes that children will come to the decision that learning about ‘the people who made (them) is certainly worthy of a bedtime story” says Hallewell.

With the goal to raise the capital necessary to cover art and printing expenses, Hallewell has turned to a new platform for group fundraising. Kickstarter.

“Our Kickstarter campaign is looking to raise $2000 from people that are interested in seeing family history and personal ancestry becoming a stronger genera in children’s publishing. People can support our cause and help turn this great poem into a successful children’s book with pledges as low as just one dollar” says Hallewell.

The URL of the Kickstarter project is: