SALT LAKE CITY, UTAH (September 1, 2015)—FamilySearch International has added more than 2.7 million searchable historical records from the 1915 New Jersey State Census to its free online collections. New Jersey records are highly sought after by family historians because the state was a popular settling point for millions of immigrants during the heyday of US immigration from 1892 to 1924. The 1885 and 1905 New Jersey State Censuses are also available, making these three online collections invaluable for researchers. You can search the 1915 New Jersey Census collection and more than 5.8 billion other free historical records at FamilySearch.org.

State censuses were typically taken mid-point between federal censuses. The 1915 New Jersey Census is halfway between the 1910 and 1920 federal censuses—a peak period of US immigration where millions of immigrants settled in the northeastern states to create their new homes and pursue their hopes and dreams in America. New Jersey took state censuses every 10 years from 1855 to 1915 to allocate the number of state legislators. The 1915 New Jersey State Census includes the names of each member of the household, location, gender, birth date (month and year) and birthplace. These state censuses can help researchers discover additional family members, migration patterns, and other important information.

The 1915 New Jersey collection contains 2,785,000 records spread across 21 counties and 565 municipalities. It was taken roughly two years before the US entered World War I and contains information about thousands of residents shortly before they went to war. The population of New Jersey was growing rapidly during this time, so this new index includes over 600,000 additional records compared to the 1905 state census.

This 1915 New Jersey Census includes several notable residents at the time, including: 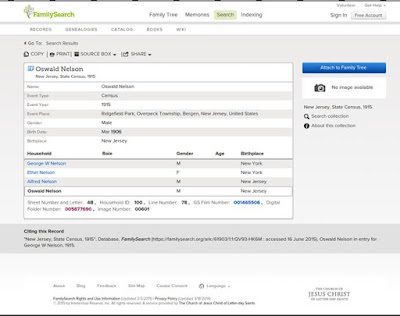 FamilySearch International has the rights to publish the index created by its online volunteer community, but not the rights to publish the images owned by the state of New Jersey. Patrons can access the images by renting the microfilm containing their ancestor’s entry online for a nominal fee and viewing it at any of the more than 4,600 family history centers in 132 countries. The film number (noted as GS Film Number) can be easily located in the Person Details page of the census index for your ancestor on FamilySearch.org. The images on microfilm can reveal additional information, including marital status, citizenship, occupation, and whether homes were owned or rented.

FamilySearch International is the largest genealogy organization in the world. FamilySearch is a nonprofit, volunteer-driven organization sponsored by The Church of Jesus Christ of Latter-day Saints. Millions of people use FamilySearch records, resources, and services to learn more about their family history. To help in this great pursuit, FamilySearch and its predecessors have been actively gathering, preserving, and sharing genealogical records worldwide for over 100 years. Patrons may access FamilySearch services and resources free online at FamilySearch.org or through over 4,600 family history centers in 130 countries, including the main Family History Library in Salt Lake City, Utah.
Posted by Thomas MacEntee on September 01, 2015
Email ThisBlogThis!Share to TwitterShare to FacebookShare to Pinterest
Labels: census, FamilySearch, New Jersey
Newer Post Older Post Home