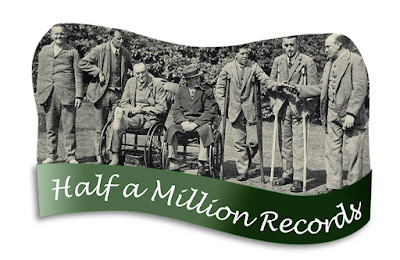 Forces War Record's latest collection - Military Hospitals Admissions and Discharge Registers WW1 (MH106 at The National Archives) has now topped half a million. Available to fully subscribed members who can search to find ancestors, details of their injuries and treatments and track their journey back to the battlefield, or back home. The collection is a major achievement, not just for the company but historically, as it could now be the only remaining genealogy source for WW1 servicemen and women due to many records being lost or destroyed during The Blitz. The highly skilled team of 70 plus experts at the Forces War Records office are still working to release the remaining records – an estimated additional 1 million.

CEO Dominic Hayhoe says, “The team here have worked tirelessly to get this many records released as quickly as possible, we're incredibly proud to have this level of skill, dedication and commitment within the company”.

Customer Rick Fouracre got in touch to say, “Thanks to this website, I've been able to track down some information on a handful of my family members that had served in both world wars. I still have a lot more to find, but it has been a fantastic experience finding the info and to a partial degree, closure. Thank you.”

Rachel Cope and Naomi Stevens are two of our data interpretation experts, and they say, “The biggest challenge we face is working out what the individual letters are, which has to be done before deciphering what the words are, and in what context they are meant. De-coding unfamiliar medical terminology, abbreviations and even little known religions is a daily challenge"

Forces War Records (www.forces-war-records.co.uk) is the website to visit for anyone researching their family’s military history, or searching for ancestors through military data. FWR specialises only in military history, and contains over seven million records of servicemen and women from medieval times - right through to the present day. The 70 plus strong team of professional researchers and military experts constantly and painstakingly uncovers new information, enabling more in-depth and accurate searches to be made every day.
Posted by Thomas MacEntee on October 21, 2015
Email ThisBlogThis!Share to TwitterShare to FacebookShare to Pinterest
Labels: Forces War Records, military records, UK genealogy
Newer Post Older Post Home