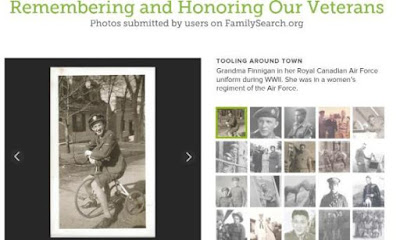 SALT LAKE CITY (November 11, 2015)—As the nation pauses this Veteran’s Day to remember those who have fought in our country’s name, FamilySearch marks the 50th anniversary of the Vietnam War by helping families piece together the stories of courage and sacrifice of veterans hidden from their family’s history. Two new online collections received from the National Archives and Records Administration account for all known casualties in the Southeast Asian combat zone during the Vietnam War era and beyond. Search these and over 100 free military collections brought together for Veteran’s Day to help families more easily locate and learn about their ancestor’s military service at FamilySearch.org/honorvets.

The US military sustained over 58,000 casualties in the Southeast Asian combat zone out of the roughly 8 million Americans who served there between 1956 and 1975. Those casualties include not only war dead but prisoners of war, soldiers missing in action, and soldiers with wounds severe enough to warrant being sent home (repatriated). Families can find records for each soldier counted as a casualty during this time in either or both of the collections maintained by FamilySearch.

Since both of the Vietnam records collections were taken from essentially the same original sources, researchers will most likely find the names they are seeking in both collections. But they should check both because additional details may be found on one or the other. In each collection you will find a link titled “Find More.” It will link to more sources and helps about Vietnam research on the Church Wiki.

The United States Casualties of the Vietnam War, 1956-1998 collection) was originally comprised of two files: the Combat Area Casualties Current File, 6/8/1956-1/21/1998 and the Combat Area Casualties Returned Alive File, 5/1/1962-3/22/1979. The first contains information on war dead, prisoners of war, and soldiers missing in action, while the second accounts for military personnel wounded and repatriated immediately before, during, and after the conflict. The collection as a whole includes approximately 58,959 records. The United States Military Personnel Who Died During the Vietnam War, 1956-2003 collection (counts for fatalities suffered in the Southeast Asian combat zone and includes approximately 58,230 records.

Records in the collections include names; dates of death or repatriation; military information such as branch of service, rank, and tour of duty; birth date; home residence; marital and citizenship status; and other facts. One record tells when the person entered the service and when that person died. John Foster Johnson is an example of the tragedy of this war. He was born in December 1945, and he entered the service when he was 23 years old on January 4, 1968. This young man never married, had been a member of the Baptist Church, and was killed on 10 March 1968, just a little more than two months after he entered boot camp. This experience was repeated thousands of times for families who lost their young sons, their brothers, and their friends. In this record is also found information about those missing in action who never returned home. These records can be used for further research into a deceased family member’s military career and civilian life before, during, and sometimes after the war, if they survived to go home and die there.

Regardless of the diverse opinions of the war, and the politics surrounding it, many families still seek a better understanding of those now deceased ancestors and relatives who fought. In a recent blog post, FamilySearch collection manager Ken Nelson noted, that “Those of us who grew up then remember hearing the casualties reported each night on the news.... It became a part of our lives back then and in many ways is still with us today.” FamilySearch hopes that the growing military record collections can help piece together the stories of those who sacrificed so much during times of conflict and provide a fuller picture of the lives of veterans who served to their descendants.

FamilySearch International is the largest genealogy organization in the world. FamilySearch is a nonprofit, volunteer-driven organization sponsored by The Church of Jesus Christ of Latter-day Saints. Millions of people use FamilySearch records, resources, and services to learn more about their family history. To help in this great pursuit, FamilySearch and its predecessors have been actively gathering, preserving, and sharing genealogical records worldwide for over 100 years. Patrons may access FamilySearch services and resources free online at FamilySearch.org or through over 4,600 family history centers in 132 countries, including the main Family History Library in Salt Lake City, Utah.
Posted by Thomas MacEntee on November 09, 2015
Email ThisBlogThis!Share to TwitterShare to FacebookShare to Pinterest
Labels: FamilySearch, military records, photographs
Newer Post Older Post Home