New York, New York, January 7, 2016. D. Joshua Taylor, the prominent genealogist, author, and lecturer, has been appointed President of the New York Genealogical and Biographical Society, effective February 1, 2016. He succeeds McKelden Smith, who is retiring after serving as its highly-regarded President of seven years.

Jeanne Sloane, chairman of the board of trustees of the NYG&B, said, “We are thrilled that Josh has accepted this position. He brings to the NYG&B dynamic energy and his well-known passion for the mission of genealogical societies in general. He has broad experience as an advanced researcher and riveting lecturer. Plus he has the expertise we require in the innovative use of technology in our field.” 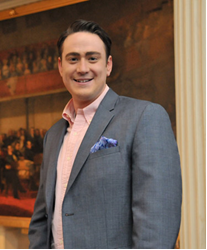 Ms. Sloane also said that Mr. Taylor already knows the NYG&B unusually well. “Most recently,” she said, “Mr. Taylor was Director of Family History at Findmypast.com. While he was in this position he coordinated the integration of the NYG&B’s eLibrary with the Findmypast platform.

“Before that, as a consultant, he played an integral role in the strategic planning process for the NYG&B, which resulted in the 2015 publication of the Society’s award-winning New York Family History Research Guide and Gazetteer.

“And Mr. Taylor, as president of the Federation of Genealogical Societies, was a leader in creating the FGS Regional Conference which was integrated with the New York State Family History Conference, co-sponsored by the NYG&B and held in Syracuse, New York, in August, 2015.”

Mr. Taylor noted, “I am thrilled to embark on this new endeavor with the NYG&B. In today's world, the NYG&B's mission to help those of all backgrounds discover their family history is essential, and something that I am deeply committed to. I am truly honored to be joining the NYG&B and to being a part of its bright future.”

The NYG&B also played an important formative role in Mr. Taylor's interest in genealogy. “The NYG&B Record was the first genealogy periodical I came across in my genealogical research,” noted Taylor, “and since that time, my love and respect for the NYG&B's role as a leader and source of genealogical scholarship has only grown. It is an important legacy that I look forward to continuing for many years to come.”

Mr. Taylor, who holds an MA in history and an MLS in Archival Management, is the recipient of numerous awards and honors, including RootsTech’s Distinguished Presenter Award. He has been a featured genealogist on the television series Who Do You Think You Are? and is currently a host on the popular PBS series Genealogy Roadshow, whose third season is currently in production.

The former Director of Education and Programs at the New England Historic Genealogical Society, Mr. Taylor has published numerous articles in American Ancestors, the Association of Professional Genealogists Quarterly, and other periodicals. He is the author of The Keane and Sheahan Families of Bridgeport, Connecticut, a study of a family’s immigration and life in New England after the Irish famine.

The New York Genealogical and Biographical Society, a membership organization founded in 1869, is the second oldest genealogical society in the United States. The NYG&B Record, a distinguished, peer-reviewed quarterly journal, has been in publication continuously since 1870. The Society publishes the New York Researcher, a quarterly which provides updates on research resources in New York and other subjects; maintains a growing website rich in New York family history content, including the eLibrary hosted on Findmypast; and produces a calendar of educational programs, including the biannual statewide genealogy conference. The Society also publishes books, including the monumental, 856-page New York Family History Research Guide and Gazetteer, and the forthcoming guide to the New York City Municipal Archives. Details about the society are at NewYorkFamilyHistory.org.
Posted by Thomas MacEntee on January 08, 2016
Email ThisBlogThis!Share to TwitterShare to FacebookShare to Pinterest
Labels: D. Joshua Taylor, genealogical society, New York Genealogical and Biographical Society
Newer Post Older Post Home