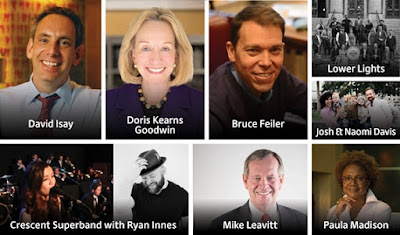 SALT LAKE CITY, 27 January 2016—RootsTech, the largest family history conference in the world, is looking forward to over 20,000 visitors over four days with an exciting array of speakers and entertainers, over 250 interesting and informative classes, a huge expo hall with more than 160 exhibitors. There is something for every level of family history—from the beginner to experienced. The three-day conference begins on Thursday, February 4, and goes through Saturday, February 6. For more information go to RootsTech.org.

The keynote speakers and offerings reflect the growing influence of family history. Today multiple generations of all ages are engaging through family storytelling and sharing memories within families using social media and an expanding array of new technologies and mobile apps. The opening session on February 4 will begin with Stephen T. Rockwood, who is the managing director for the Family History Department of The Church of Jesus Christ of Latter-day Saints and President/CEO of FamilySearch International.

Also featured is Paula Williams Madison who is chairman and CEO of Madison Media Management LLC, a Los Angeles based media consultancy company with global reach. After her retirement in 2011, Madison started doing research on her family lineage. She wrote the book and produced a movie Finding Samuel Lowe: China, Jamaica, Harlem in April 2015 about her experiences. A free screening of the movie will be provided on Wednesday, February 3.

Bruce Feiler is one of America’s most popular commentators about contemporary life. He hosts the PBS series Walking the Bible and Sacred Journeys with Bruce Feiler. He wrote The Secrets of Happy Families containing best practices for busy parents from some of the country’s most creative minds. He has appeared on many television shows on NRP, CNN, Fox News, MSNBC, and others.

On Friday, February 5, David Isay, is a scheduled keynote. He’s the founder of StoryCorps, an award-winning organization that provides people of all backgrounds and beliefs with the opportunity to record, share, and preserve their life stories. 50,000 interviews have been archived and preserved at the American Folklife Center at the Library of Congress. He has also written several New York Times bestsellers, including Listening is an Act of Love. He is a broadcaster and documentarian, and his research reveals ways to tell great stories for the family historian.

Also on Friday, Josh and Naomi Davis, popular family bloggers known as Love Taza, will speak. On their blog, they relate their life with their three children in bustling New York City. The blog has become a digital destination viewed by millions around the world. People love the inspiration about raising a family and the appreciation Naomi has for life’s simple joys.

On Saturday, February 6, Doris Kearns Goodwin is a world-renowned presidential historian and Pulitzer Prize-winning author. She worked with Spielberg on the movie Lincoln, based in part on her award winning Team of Rivals: The Political Genius of Abraham Lincoln. She has written books about Frank and Eleanor Roosevelt, Lyndon Johnson, and the Kennedys and shares her expertise and commentary on many television shows. She has a PhD in government from Harvard and was an assistant to Lyndon Johnson and has been a consultant in several PBS and History Channel documentaries.

Also on Saturday, Michael Leavitt, a three-term former governor of Utah, will speak. He also served in George W. Bush’s cabinet as an Administrator of the Environmental Protection Agency and Secretary of Health and Human Services.

The second annual Innovator Summit is a one-day event on Wednesday, February 3, for developers, entrepreneurs, and innovators from around the globe to explore, examine, and discover business and technological opportunities within the family history industry—a rapidly growing multibillion dollar industry. Innovators from around the globe and from all industries will be competing for a piece of the $100,000 in total cash and in-kind prizes. The keynote speaker for this event will be Ken Krogue, an entrepreneur who has taken his business InsideSales.com from a small beginning to a billion dollar industry. He will share his expertise about social media and how to use the different forms effectively.

Along with the keynotes, RootsTech attendees will be able to hear from the Crescent Super Band, featuring Ryan Inness, and Lower Lights, a popular gospel and folk band.

More information about speakers, entertainers, classes, and how to register at RootsTech can be found at RootsTech.org.

RootsTech, hosted by FamilySearch, is a global conference celebrating families across generations, where people of all ages are inspired to discover and share their memories and connections. This annual event has become the largest of its kind in the world, attracting tens of thousands of participants worldwide.
Posted by Thomas MacEntee on January 27, 2016
Email ThisBlogThis!Share to TwitterShare to FacebookShare to Pinterest
Labels: FamilySearch, genealogy conferences, RootsTech
Newer Post Older Post Home