SALT LAKE CITY, UTAH—As of February 9, 2016, the Freedmen’s Bureau Project reached a significant milestone with more than one million records transcribed. Nationwide efforts to make these historic records of African Americans and others from the Civil War-era searchable online represents 51 percent of the total records needed to complete the project. When complete, the Freedmen’s Bureau Project will be a virtual Rosetta stone for African Americans seeking to extend their family histories beyond the proverbial brick wall of the 1870 census.

“As we have worked with the African American Genealogical and Historical Society (AAHGS), other institutions, and countless volunteers, our goal has been to complete the indexing, arbitration, and online publication of these records one year from our launch date, or Juneteenth 2016,” reported Thom Reed, marketing manager for FamilySearch International, a nonprofit organization sponsored by The Church of Jesus Christ of Latter-day Saints.

Indexing is the process and technology online volunteers use to make these highly sought after records easily searchable online. Nearly 16,000 volunteers have contributed to this effort, including JoAnn Gilbert Jeppsen of Mantua, Utah. Jeppsen has been working as an arbitrator (reviewer of indexed records) on the project since November 2015. She was recently informed that she had arbitrated the one-millionth record—a monumental milestone in this project. “Working on the Freedmen’s Bureau Project has been interesting work,” said Jeppsen, who has been indexing census records and other documents on a weekly basis for FamilySearch since 2006. “It gives African Americans an opportunity to find their records.” 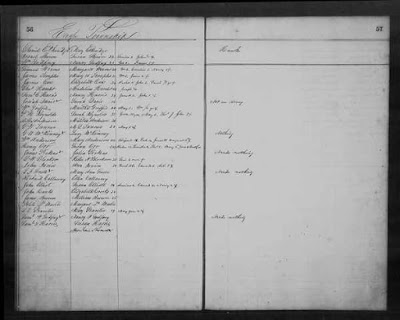 “I was just amazed,” expressed Jeppsen. “I didn’t know the government had these programs for [Civil War-era African Americans]. I just think about what happened to them when they were freed.” She has worked on Freedmen Bureau documents that include labor contracts, pensions, and rations, as well as information about a murder trial.

Jeppsen encourages others to participate in indexing. “It really doesn’t take much time. It’s something they can do, regardless of their circumstances. If they’re hooked up to a computer, [they] can do it.”

Reed anticipates there will be more than two million names online for African Americans to search for their family when the Freedmen’s Bureau Project is complete. And although there has been a steady stream of new volunteers joining the project each week, more volunteers are needed to complete the project on time.

Once the project is finished, in addition to being freely searchable online at FamilySearch.org, the database will be shared with the Smithsonian National Museum of African American History and Culture (NMAAHC) in Washington, D.C. NMAAHC is also a sponsor of the Freedmen’s Bureau Project and will open on September 24, 2016.

“The genealogical community is fully embracing these records,” said Hollis Gentry, genealogy specialist at NMAAHC. “You’ll find African American genealogists are quite excited about the Freedmen’s Bureau Project. It offers a tremendous potential for them to find their ancestors in this large group of federal records that may bridge the gap between freedom and slavery in the records.”

“We greatly appreciate the contributions made by our partners, by national and international volunteers, and by Smithsonian volunteers,” added Gentry. “Each indexed document brings us closer to reclaiming our ancestral heritage and historical past. We look forward to the completion of the project in 2016 and invite everyone with an interest in American history and African American culture to support our efforts to index the records of the Freedmen’s Bureau.”

The Freedmen’s Bureau, formerly known as the Bureau of Refugees, Freedmen, and Abandoned Lands, was organized under an 1865 Congressional order at the conclusion of the Civil War. It offered assistance to refugees and freed slaves in many ways. Handwritten records of the Freedmen’s Bureau include marriage registers, hospital or patient registers, educational records, labor contracts, indenture or apprenticeship papers, and many more kinds of documents. The records were compiled in 15 states and the District of Columbia.

For more information on the project, visit DiscoverFreedmen.org.

FamilySearch International is the largest genealogy organization in the world. FamilySearch is a nonprofit, volunteer-driven organization sponsored by The Church of Jesus Christ of Latter-day Saints. Millions of people use FamilySearch records, resources, and services to learn more about their family history. To help in this great pursuit, FamilySearch and its predecessors have been actively gathering, preserving, and sharing genealogical records worldwide for over 100 years. Patrons may access FamilySearch services and resources free online at FamilySearch.org or through over 4,813 family history centers in 130 countries, including the main Family History Library in Salt Lake City, Utah.
Posted by Thomas MacEntee on February 23, 2016
Email ThisBlogThis!Share to TwitterShare to FacebookShare to Pinterest
Labels: African-American genealogy, FamilySearch, FamilySearch Indexing, Freedmen's Bureau
Newer Post Older Post Home