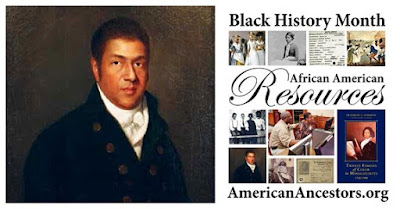 Starting February 1, 2016 through this new portal Guests Users on AmericanAncestors.org may access several African American databases free in order to get a sample of the variety of information to be found in the collection of African American resources at NEHGS. Among them is a large database Free Negro Heads of Families in the United States in 1830, a list compiled from the 1830 census and published in 1925. It contains the name, age range, family size, and county and state residence of 47,300 individuals in 27 states and one territory—a valuable source of records on free African Americans in that period.

Researching African American ancestors can be one of the most challenging tasks in the field of American genealogy. Creative searching methods must be utilized, requiring a thorough understanding of slave and freeman record keeping and notations in the earliest years of the settlement of America, and of name registration and documentation of vital statistics after emancipation in 1863.

There are hundreds of resources available at NEHGS to assist family historians with researching African American ancestors: from published genealogies to local histories, Bible, cemetery, and court records, original manuscripts and rare documents to many online databases on AmericanAncestors.org.

NEHGS’s collection of guides and how-to books concerning African American genealogy hold important clues to solving family mysteries in research. And NEHGS, the oldest and largest family history organization in America, has an expert staff of genealogists available for private consultations, research assistance, and guidance for members and the public through its online webinars and study guides.

The five free databases offered by NEHGS to Guest Users from the new online portal during Black History Month include:

From the introduction: "Hampden County, Massachusetts, was a significant center of African American life between the years 1650 and 1865. Its location at the ‘crossroads of New England,’ close over the border from Connecticut to the south and across the wide Hudson River and a mountain range away from slavery in New York to the west, made Hampden County a haven for escaped slaves. The establishment in Springfield of the U.S. Armory in 1794 placed the town at the very epicenter of America’s Industrial Revolution... The main body of the work consists of genealogical and biographical information in alphabetical order by surname. Following this section, there is a separate alphabetical list of individuals only known by their slave names."

This volume is available at the NEHGS Boston research library. The full introduction to this volume is also available for download as a pdf file on AmericanAncestors.org.

People of Color in the Massachusetts State Census, 1855-1865

Massachusetts took state censuses every ten years from 1855 to 1925, but only the enumerations for 1855 and 1865 still exist. Ann S. Lainhart has extracted the names of every person of color from these censuses for this database. The original censuses are available at the Massachusetts State Archives and microfilm copies are available at the New England Historic Genealogical Society, the Boston Public Library, and through the LDS Church libraries.

The 1855 and 1865 Massachusetts state censuses provide a complementary resource to the United States federal censuses, allowing researchers to trace a family every five years between 1850 and 1870. The state census can also occasionally provide additional information not present in the federal census, such as town or county of birth. For the 1855 census, an individual’s town of birth was recorded for most residents in the towns of Abington, Andover, Brimfield, Brookline, Carlisle, Dennis, Enfield, Harwich, Holland, Ipswich, Marshfield, New Ashford, North Attleboro, Pembroke, Provincetown, Shutesbury, Wayland, Wellfleet, Westport, Wilmington, and Yarmouth. This database holds more than 1.1 million records.

There are three important features that make this state census different from the Federal censuses. First is a column that asks whether the person is married, single, or widowed. This can help determine relationships in a household. Secondly, it asks whether a person is a ratable poll ('p'), ratable poll and legal voter ('p1'), or ratable poll and naturalized voter ('pn'). This can help to determine when someone became a citizen. The third feature is that 96 towns in 1865 give specific town of birth rather than just state and some give town or county of birth for those of foreign birth.

Free Negro Heads of Families in the United States in 1830

This 192-page list of free Negro heads of families was compiled from the 1830 census under the direction of Carter G. Woodson, Ph.D., and published in 1925. It contains the name, age range, family size, and county and state residence of 47,300 individuals in 27 states and one territory.

The original volume is available for viewing at the NEHGS Research Library. And visitors can download the 58-page "Brief Treatment of the Free Negro" introduction as a searchable pdf file.

These databases from NEHGS will be open with FREE access to the public beginning Monday, February 1, and extending through Monday, February 29. Registration is required at AmericanAncestors.org as a FREE Guest User to gain access to these valuable resources. Guest User accounts allow web visitors to use a limited suite of AmericanAncestors.org databases and access web content such as making purchases from the online store. Unlimited access to all 450+ million records and to other benefits is available through membership at NEHGS.

The founding genealogical society in America, New England Historic Genealogical Society (NEHGS) was established in 1845. Today it has a national collecting scope and serves more than 130,000 constituents through an award-winning website, AmericanAncestors.org.