Heredis announces its application for Android 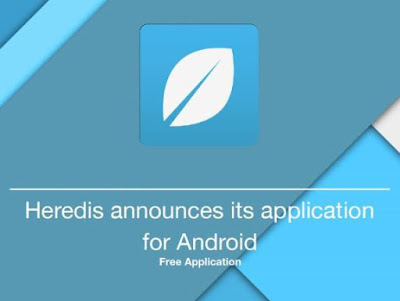 MONTPELLIER, MARCH 10, 2016 - Today Heredis has launched its Heredis for Android application. More than 2 years after the release of its mobile application for iOS, Heredis is available for all users with a phone or a tablet running the Android OS. This application is free.

Heredis lets you create your family tree, share your genealogy and take it with you wherever you want with this free app.

The Heredis Android app is a beta version. This means that some features are not yet available. Gradually, in the upcoming weeks, users will discover new features!

Initially, the beta version offers essential functions for working with your genealogy on Android. Sending your Heredis files (only from the 2015 versions for Windows and Mac and above), viewing, browsing, editing, deleting and adding certain data from your tree.

In the coming months, it will offer exactly the same features as its counterpart on iOS.

This version is available worldwide in two languages, French and English on Google Play Store: https://play.google.com/store/apps/details?id=com.bsdconcept.heredis

The adventure began in 1994 when David Bernard, computer and genealogy enthusiast, created Heredis for a family member who wanted a simple and intuitive software that he could not find.
Today it is the most popular genealogy software in Europe. For 22 years, the whole team has been at the service of people who love genealogy and the history of their ancestors. Cutting-edge and revolutionary, Heredis stands out by offering ever more innovative technological choices and providing real genealogical solutions adapted for the user.

Equally, Heredis also stands out for its cooperative spirit: since July 2014, BSD Concept has been a SCOP where employees have joined forces to give life to this joint project.