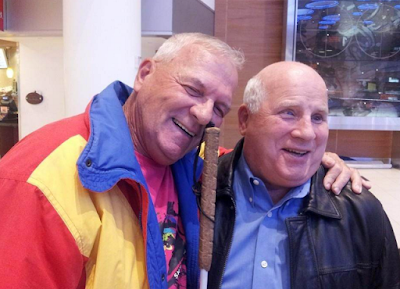 May 02, 2016 09:00 AM Eastern Daylight Time
TEL AVIV, Israel & TORONTO--(BUSINESS WIRE)--MyHeritage, the fastest-growing destination for discovering, preserving and sharing family history, announced today the reuniting of two long-lost brothers born in the Bergen-Belsen displaced persons camp who subsequently separated as young children and grew up in Israel and Canada, respectively.

Izak Szewelewicz, who was born in the displaced persons camp at Bergen-Belsen, Germany shortly after World War II, was adopted by an Israeli family in 1948 at the age of three, and was then raised in Israel. Izak's mother, Aida, had meanwhile immigrated to Canada, and later found and contacted Izak when he was an adolescent. They met a few times, but she always refused to speak about the identity or fate of Izak's father or anyone else from the family. Only a few years ago, Izak received documents from the Bergen-Belsen archive that delivered a shocking revelation: he had a brother named Shepsyl in the camp, as well as another relative. The records indicated that both relatives had emigrated to Canada, separately from his mother. In September 2013, Izak's nephew Alon Schwarz reached out to MyHeritage with a special request: to help him find Izak's lost brother. MyHeritage rose to the challenge.

Together with Alon Schwarz, MyHeritage Head Genealogist (UK) Laurence Harris embarked on a relentless search that eventually led him to successfully locate Melanie Shell, the only daughter of Shep Shell. Shep’s name had been anglicized upon arrival in Canada; his original name was Szepsyl Szewelewicz. Izak's brother had been found. An emotional reunion between the brothers took place in Canada. A few days later, the brothers went to visit Aida, whereupon Shep met his mother for the very first time since he was a baby. In March 2014, MyHeritage arranged for the brothers to have their DNA tested, revealing more surprising details of the family story, and more secrets kept by Aida for nearly seven decades.

"MyHeritage brings families together," said Laurence Harris. "We provide tools for our users to make family history discoveries and connect with long-lost relatives. Izak and Shep's reunion was the result of our technology, databases, and in-house expertise in action, and our unending willingness to help people. Seeing how meaningful the outcome was for the brothers and their families is the very best reward imaginable for our efforts in this pro bono initiative."

Shep Shell, a former Paralympic athlete who represented Canada in international tournaments, wrote to MyHeritage: "I can't tell you what it means to finally meet my brother after 65 years and find that I also have a wonderful, large family as a bonus. What is even more amazing is the fulfillment of my lifelong dream to find my birth mother. Finding her alive was the icing on the cake. Finding Aida closes a circle for me and gives me peace of mind that I am not alone."

Alon and Shaul Schwarz have produced and directed a feature-length documentary about this story, entitled Aida's Secrets. The film follows the family's efforts to uncover their post-World War II history and captures the reunions between the two brothers and between Shep and his mother. Aida's Secrets will have its world premiere at the Hot Docs Canadian International Documentary Festival in Toronto on May 3, 2016.

MyHeritage is the world's fastest-growing destination for discovering, preserving and sharing family history. As technology thought leaders, MyHeritage is transforming family history into an activity that’s accessible and instantly rewarding. Its global user community enjoys access to a massive library of historical records, the most internationally diverse collection of family trees and groundbreaking search and matching technologies. Trusted by millions of families, MyHeritage provides an easy way to share family stories, past and present, and treasure them for generations to come. MyHeritage is available in 42 languages. www.myheritage.com

Family secrets, high drama and generations of contemporary history unspool in this international story that begins with World War II and concludes with an emotional 21st-century family reunion. Izak was born inside the Bergen-Belsen displaced persons camp in 1945 and sent for adoption in Israel. Secret details of his birth mother, an unknown brother in Canada and his father's true identity slowly emerge in this extremely personal investigative film. Timely questions of identity, resilience, compassion and the plight of displaced persons are brought to life as Izak and Shep, the almost 70-year-old brothers, finally meet in Canada, then head to a nursing home in Quebec to introduce Shep to his elderly mother, Aida, for the first time.

Aida's Secrets is a family story intertwined inside an historical investigative documentary spanning seven decades. The many question marks surrounding the plot, make it a wild journey through time, to periods when the concepts of love, life and death where shaken and rebuilt. An observation of human nature in the desperate need to survive, rekindle passion, and create a new family in a society reborn after the war.

The film is an Israel-German-American coproduction and was supported by Yes Docu, NFCT, ARTE and SWR. The film was produced by Reel Peak Films. For more information, visit the film's Facebook page.

Brothers and filmmakers Alon Schwarz and Shaul Schwarz have worked on this film for three years. Shaul and Alon have previously worked together on other films, including Narco Cultura which was released in 2013 at Sundance, HotDocs, Belinale, and other leading film festivals.
Posted by Thomas MacEntee on May 04, 2016
Email ThisBlogThis!Share to TwitterShare to FacebookShare to Pinterest
Labels: MyHeritage
Newer Post Older Post Home