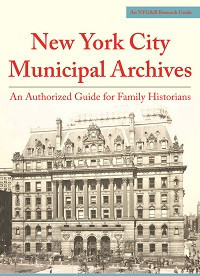 The publication unlocks key resources for anyone tracing New York City’s vast history to leverage the hundreds of key collections housed at the Municipal Archives.

The 245-page guide will make research at this vital facility far more approachable and will introduce researchers to many previously-unknown record collections housed there.

As one of the world’s largest repositories of city records, the holdings of the New York City Municipal Archives offer untold resources for those tracing the history of New Yok City and its families. But until now, it has remained difficult for anyone but the most experienced researcher to navigate more than the basics of this essential archive. This new guide, created with the assistance of the New York City Municipal Archives, will make it possible for genealogists, family historians or anyone researching New York City’s vast history to leverage the hundreds of key collections found there.

The guide has already been the recipient of significant praise from the genealogical and archival community, including David S. Ferriero, Archivist of the United States, who stated, “What a gift to genealogists, researchers, and the just plain curious! For the first time a treasure trove of New York City history going back to the Dutch Colonial Era is described to facilitate easy access.”

The publication, which has been in progress for more than two years, is authored by genealogist Aaron Goodwin of New York City. Harry Macy, Jr., FASG, FGBS, is its consulting editor. Support for the publication was provided by Furthermore, a program of the J.M. Kaplan fund and former NYG&B trustee, M. David Sherrill.

Pauline Toole, Commissioner, New York City Department of Records and Information Services noted, “We look forward to welcoming family historians at the Municipal Archives as they explore all the wonderful collections highlighted in the new guide. This comprehensive resource will be especially useful for our patrons who want to go beyond the basics as they document their New York City roots.”

D. Joshua Taylor, NYG&B President remarked, “The guide provides a look at key records and largely unknown collections that will unlock information and solve mysteries relating to millions of those who at one time called New York City their home.”

Last year the NYG&B released the monumental New York Family History Research Guide and Gazetteer which has quickly become a best-selling “must-have” resource for those tracing New York genealogy and family history. The New York City Municipal Archives: An Authorized Guide for Family Historians is the latest in the organization’s series of research guides, with further topics planned in the future.

The New York City Municipal Archives: An Authorized Guide for Family Historians is available in print for $40 at NewYorkFamilyHistory.org (members of the NYG&B receive a $10 discount and can also purchase an exclusive digital version alongside a paperback copy).

About the New York Genealogical and Biographical Society (NYG&B)

Since 1869 the NYG&B has been bringing families closer to their New York State history by preserving and sharing information related to family history and genealogy. As the largest genealogical society in New York, the NYG&B’s website, NewYorkFamilyHistory.org, includes digital collections, articles, research aids, and other essential tools for those researching New York State. The NYG&B has thousands of members across the globe and publishes The NYG&B Record each quarter, a scholarly journal devoted to New York genealogy and biography, as well as the award-winning New York Researcher, which provides the latest news and updates for those tracing their New York ancestors. In 2015 the NYG&B published the award-winning New York Family History Research Guide and Gazetteer, offering more than 800 pages of detailed resources related to New York. Each day the NYG&B engages with the dynamic, fast-growing, rapidly changing field of family history through accurate, thorough research and the highest standards of scholarship.
Posted by Thomas MacEntee on August 10, 2016
Email ThisBlogThis!Share to TwitterShare to FacebookShare to Pinterest
Labels: New York Genealogical and Biographical Society, NYGBS
Newer Post Older Post Home